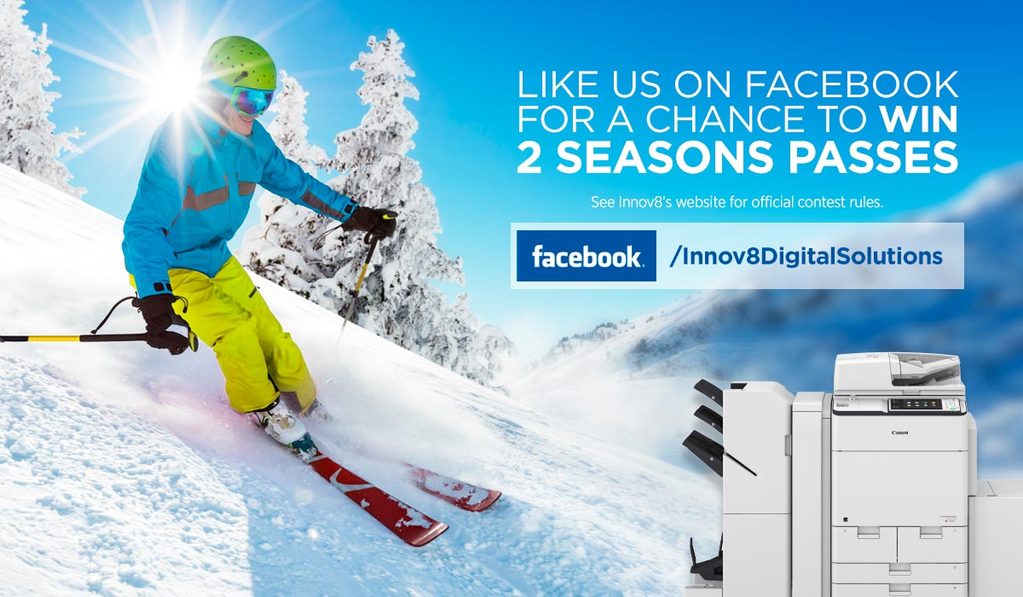 Between September 25, 2017, and October 28, 2017, you may enter the Contest by (i) pressing “Like” on Innov8’s Facebook Contest post and (ii) commenting underneath why you should have an #Innov8Adventure at SilverStar this winter.

The Contest is being sponsored by Innov8 Digital Solutions Inc. (“Innov8”). This promotion is in no way sponsored, endorsed or administered by, or associated with Facebook. You understand that you are providing your information to the owner of this Facebook page and not to Facebook.

2. ELIGIBILITY : The Contest is open to residents of Canada, other than Minors and residents of Quebec (the “Entrants”). There is a limit of one (1) entry per person. Proof of identification must be produced on request. Officers and directors of Innov8 and its partners and associate companies, their advertising and promotional agencies and their respective affiliates and associates, Contest judges, Contest prize suppliers and any other companies engaged in the development, production or distribution of materials for this Contest, are not eligible to enter or participate in this Contest.

3. PRIZE : There is one prize available to be won, consisting of two Adult Seasons Passes to SilverStar Mountain Resort (the “Prize”). The value of the Prize is approximately Two Thousand Five Hundred and Ninety- Eight Canadian Dollars ($2598.00 Cdn).

Stay up to date.
Let's innov8.

We have all of the ink and toner

you need for your business.